I’m giving serious thought to a purchase of the watch in the centre (click to enlarge): 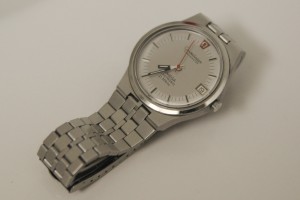 So with help from the fine folks at the WatchUseek Forums, it turns out the the watch I’m looking at is is an Omega Electric Constellation Chronometer, model number ST 3980803, priced at 117.50 pounds back in 1973 (the latter info care of Old-Omegas.com). It contains a Bulova patent tuning fork module and is commonly referenced to by “f300”, referring to the 300 oscillations per second the resonator within the watch vibrates at.

Now let’s see if the watch store I spotted this fine piece at will make a deal. $450, take it or leave it…

Update: My bargaining couldn’t net me a deal better than $690 final as their best offer; I walked.

Update II: I returned to the scene of the crime on November 19, 2007. After some yet further bickering I made the purchase for a significant amount less than the number quoted above. It truly is in incredible condition and is slowly becoming my daily wearer (the Kenneth Cole’s battery keeps dying prematurely).

I’ve included an expanded writeup on this particular watch below. There’s also a fantastic article about the Omega f300 series of watches over at DeskDivers.com that’s worth reading.

The Omega Electric Constellation Chronometer, reference number ST 398.0803, priced at 710 Swiss francs back in 1971. It contains a Bulova patent tuning fork module and is commonly referenced to by “f300”, referring to the 300 oscillations per second the resonator within the watch vibrates at.

According to Omega, the accuracy of the watch is “within 60 seconds per month, or an average of two seconds per day.”