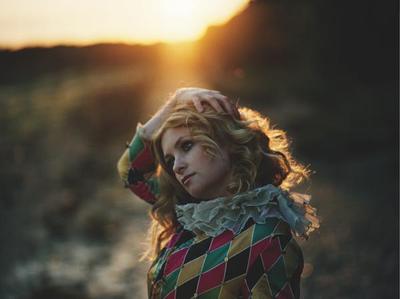 Written in conjunction with Christabel Jackson. Original review appears at The Panic Manual.

Toronto – With my New Year’s resolution of making 2008 my busiest year for concerts ever fresh in my mind, when I found a pair of tickets to Goldfrapp at the Danforth Music Hall offered to me at cost price, I quickly made an offer. One round trip to Royal York subway station and $90 in cash later and the rights to potentially see Alison Goldfrapp wear a horse’s tail on stage were mine.

I’ll tell you right now: The horse’s tail thing didn’t play out. Sorry. It’s history for real. It was still a good show though, and a polka-dotted muumuu made its appearance, so keep reading.

The Danforth Music Hall is a pretty ideal venue to watch a show like Goldfrapp. It’s large – slightly below the capacity of Massey Hall – but with far more comfortable permanent seats. Aside from the orchestra seating area, there’s a balcony for latecomers to use, as well as four box seats that are probably strictly for show. Seating was unassigned and first-come, first-serve, so my concert-going partner Christabel and I quickly established ourselves three quarters of the way back on the right side of the orchestra section. A well-stocked bar in the lobby ensured that drinks of every type were available, but bringing anything other than water bottles into the seating areas was restricted. I wasn’t in the mood for anything other than Dasani-branded Brampton tap water anyways. Shortly thereafter we were underway.

The opening act for Goldfrapp that night was the Great Lake Swimmers, which to me was an odd choice. Though Goldfrapp themselves have always meandered in and out of the pop/electronica they made their name in, I’ve always considered the opening act/main act deal to be a symbiotic one: We give you stage time and an audience, you get them peppy and ready to rock for when we come out. Everyone wins.

The deal that night seemed a little one-sided. Actually, though Tony Dekker was genuinely terrific on vocals and the rest of the Swimmers were similarly up to par, I literally had a hard time staying awake. The Swimmers’s new album “Ongiara” is slow and dreamy by nature, but come on. I’m twenty-seven, not eighty-seven. If I’m in danger of dozing off, you have a problem. You should be building me up before the big show, not bringing me down.

Still, it’s hard to be too negative about a bunch of talented locals trying to make it big. So, sincerely, good luck to you guys. Now on to the main act.

Note: The above is my utilitarian, dry take of what I saw and heard. (I’m a software developer, not a wandering minstrel, for God’s sake.) I asked Christabel to provide some balance for this review with her own thoughts:

You have to start with how a blue, slightly ornate hall was transformed by the bands that played there that evening. Juxtaposing how Great Lake Swimmers made the hall feel as if it was underwater, bluer, colder, deeper, quieter with the slightly askew warm sugar carnival feel of Goldfrapp. It was such a strange, melancholy choice for an opening act. Especially when you compare the electric spark of a stage presence that Alison Goldfrapp to the slightly beaten looking Great Lake Swimmers. She completely lights up the stage with her luminous halo of blonde hair and wild, uncaring stage movements.

Alison and her six-person-strong cohort hit the stage almost immediately after the Great Lake Swimmers vacated it and started right into “Paper Bag”, followed by “A & E”. Though perked up by the entrance of Alison & co., I was now even more worried about dozing off. The following song, “Utopia”, solved that problem immediately with its thumping bassline. Speaking of: Know the high notes Alison hits during the recording of that song? Yeah, she can do it for real with a volume that has to be seen (heard?) to be believed. Yeow.

This time Christabel’s thoughts meshed better with my own:

I am almost certain that the two opening songs were off the new album, which were slow and gut achingly bittersweet in true Goldfrapp fashion, but it was the opening chords of Utopia that bought the crowd’s first real cheers. That happens in all concerts, though – especially when the band is trying out new material.

An interesting note about this Goldfrapp performance that as wild-eyed and frenetic Alison was at centre stage – check out the pictures of her in the aforementioned polka-dotted muumuu – each performer in the band also aroused curiousity. One of the few male members of the band began the night using of an electric violin, only to shift to keyboard for the next song, then to bass guitar, to recorder and then, incredibly, for a few songs nearing the end of the concert, to keytar. In fact, at one point he was one of two keytarists on stage, and later even treated us to an extended keytar solo. At this point I had to lean over and remark in Christabel’s ear at the sheer difficulty of making playing a keytar look cool. Her breathless response: “HE JUST DID.”

The other member of the band who attracted a lot of our attention was the harpist. Yes, there were two harps set up in the upper right corner of the stage. While not strumming away on her harps (is strum the right word when you’re talking harps?), this cute little pixie twirled and danced in her corner and swung around the pom-poms attached to her dress as a kind of tail. If I had not been mindful of the inevitably violent temper that accompanies every stage harpist, I would have certainly crashed the post-show party and proposed to her.

Christabel: Although everyone and their dog focuses on Allison when she’s on stage – it’s impossible not to, she’s so charming and strange, childlike and then terrifyingly experienced all at once – so much like a real life marionette, the star of the show in my opinion was that guy that played all the instruments. He was so overwhelmingly happy to be doing what he was doing – both him and the renaissance fairy type harpist were wonderful to watch. The live sets were amazing, even though there did appear to be some technical glitches here and there.

And there were indeed glitches. Because of this show, I now know that an electric violin performs much like a regular violin when it loses power. (The band, while at one point looking at each other in confusion, never let it stop them.) Some tweaking of levels was in order in general, as the overexaggerated bass, combined with Alison’s natural accent, made it completely impossible to understand a single word she said in between songs. This too was overcome, though not for everyone – it just happened that Christabel and I found it hilarious and broke out into hysterical laughter every time she said something to us. Something as simple as, “Oh, we like you,” came out as, “Margh, he yamugh tew.”

I mean, what the hell – that’s funny. But we share a peculiar sense of humour.

The audience was on its feet for the well-known “Ooh La La”, though being a Toronto crowd that was accomplished fitfully and with obvious self-conciousness. The band too rose to the occasion and played strongly with a new, fast tempo for the three songs that followed, “Caravan Girl”, “Train” and Christabel’s favourite, “Strict Machine”.

Allison’s rough garbling in between sets was hilarious. My favourite song of the night had to be “Train”. That beat driving shudders through my clavicle with Allison’s unearthly calling over the top was a pure auditory miracle, I was so deliriously happy to be there for that performance alone.

We enthusiastically stayed on our feet and clapped until the band returned from behind the stage with an encore performance of “Monster Love” and “Some People” to end the night. Everyone left with a smile on their faces, and I nabbed a free Great Lake Swimmers button the way out. I’ll leave it to Christabel to wrap up with her overall impressions:

The entire show was otherworldly bordering on ethereal… lights and colours and textures in the music. Just amazing. I also found it really interesting that although the encore played were two slow, mellow songs, the crowd left with a real up feeling to it. Everyone was happy, refreshed, excited to have been there.

Goldfrapp is currently touring to promote their new album, Seventh Tree. Their final three stops in North America are in Vancouver, Seattle and Los Angeles before returning to the other side of the sea, so catch them while you can.