What caused the U.S. federal deficit? 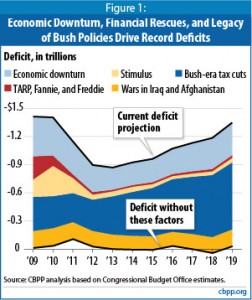 Graphs care of The Economist. Not being an American taxpayer myself, I blame my ignorance of the staggering implications of the Bush-era tax cuts on the “need to know” rule.

This is something Barack Obama has been at pains to point out, as Republicans have attacked him as a profligate spender and runner of deficits. Most of today’s borrowing, he has said, is attributable to factors beyond his control. He is essentially pointing people to charts like the one at right.

That’s a damning chart. It implicates a lot of people, including some of the same Congressional Democrats who are now joining Republicans in assailing the president for budgeted deficits, but who voted for the Bush tax cuts and the wars in Iraq and Afghanistan. Politically, this is a pretty important chart.

That said, these most recent contributions to the federal debt appear to be irrelevant when looking at the long term:

In the end, who caused what deficits when isn’t important. What is important is finding some way to avoid that spike. And both parties seem to be a long way away from having anything like a serious discussion about that challenge.