What we know about climate change 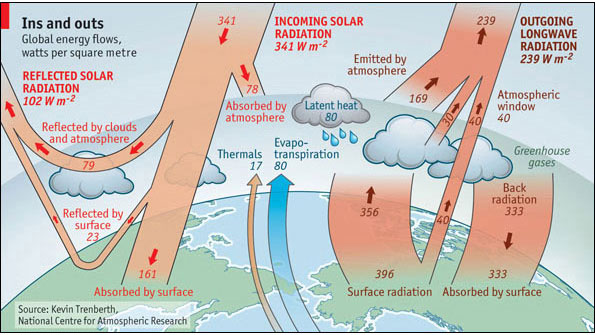 Bill Gates just retweeted an article on The Economist along with the statement that it “does a good job of summarizing the scientific discussion on global warming”. Surely enough, the once-richest man in the world had it right.

The Economist – The science of climate change: The clouds of unknowing

For a planet at a constant temperature, the amount of energy absorbed as sunlight and the amount emitted back to space in the longer wavelengths of the infra-red must be the same. In the case of the Earth, the amount of sunlight absorbed is 239 watts per square metre. According to the laws of thermodynamics, a simple body emitting energy at that rate should have a temperature of about â€“18ºC.

You do not need a comprehensive set of surface-temperature data to notice that this is not the average temperature at which humanity goes about its business. The discrepancy is due to greenhouse gases in the atmosphere, which absorb and re-emit infra-red radiation, and thus keep the lower atmosphere, and the surface, warm (see the diagram below). The radiation that gets out to the cosmos comes mostly from above the bulk of the greenhouse gases, where the air temperature is indeed around â€“18ºC.

Adding to those greenhouse gases in the atmosphere makes it harder still for the energy to get out. As a result, the surface and the lower atmosphere warm up. This changes the average temperature, the way energy moves from the planet’s surface to the atmosphere above it and the way that energy flows from equator to poles, thus changing the patterns of the weather.

No one doubts that carbon dioxide is a greenhouse gas, good at absorbing infra-red radiation. It is also well established that human activity is putting more of it into the atmosphere than natural processes can currently remove. Measurements made since the 1950s show the level of carbon dioxide rising year on year, from 316 parts per million (ppm) in 1959 to 387ppm in 2009. Less direct records show that the rise began about 1750, and that the level was stable at around 280ppm for about 10,000 years before that.

This fits with human history: in the middle of the 18th century people started to burn fossil fuels in order to power industrial machinery. Analysis of carbon isotopes, among other things, shows that the carbon dioxide from industry accounts for most of the build-up in the atmosphere.

The serious disagreements start when discussion turns to the level of warming associated with that rise in carbon dioxide. For various reasons, scientists would not expect temperatures simply to rise in step with the carbon dioxide (and other greenhouse gases). The climate is a noisy thing, with ups and downs of its own that can make trends hard to detect.

What’s more, the oceans can absorb a great deal of heatâ€”and there is evidence that they have done soâ€”and in storing heat away, they add inertia to the system. This means that the atmosphere will warm more slowly than a given level of greenhouse gas would lead you to expect.