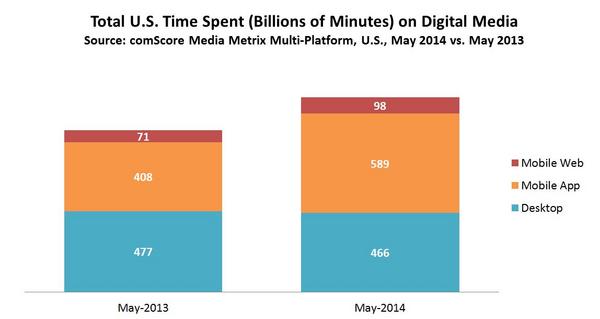 From ComScore – Is Mobile Bringing About the Death of the PC? Not Exactly, some interesting data:

Here we can see that mobile consumption has clearly exploded, with a 44% gain in mobile app usage and a 38% gain in mobile web usage. This has contributed to mobile growing its share of digital media time spent from 50% to 60% in the past year and owning a clear majority of time spent.

But importantly, desktop usage has held up in the face of increased competition from mobile for consumers’ attention, with a negligible overall decline in total time spent from 477 billion minutes to 466 billion minutes. The net result of is that we’ve seen a 20% overall increase in time spent on digital in the past year, which means a lot more opportunity to reach consumers and monetize content.

As a web developer, this tells me that websites with analytics that tell me that desktop users are predominant aren’t to be forgotten; mobile Web usage is growing, but native app usage is where people’s attention is.