The folks at Yahoo! / Flurry Analytics regularly post Flurry Insights, gleaned from data accumulated from their analytics SDK that’s embedded in hundreds of thousands of mobile devices. Back in 2015, they posted data they’d accumulated about mobile device usage in the Canadian market: 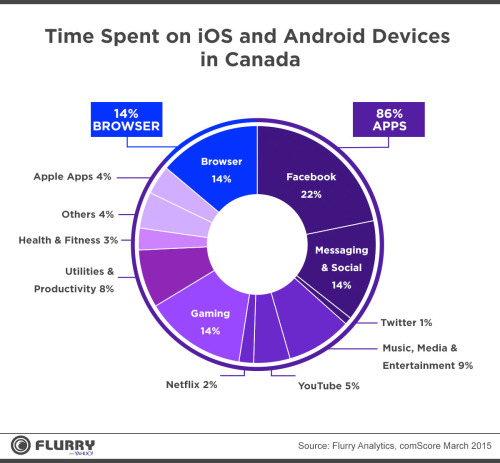 Some quick notes from the above:

Of course, that’s not to say that you can’t create an app that takes up 50% of someone’s time on their devices, even over the long haul. But it’s clear that for the average Canadian, there’s only a small slice of time that they’re likely to spend using the new app you’ve created for them.

Next up: What kind of devices are in use out there? Flurry Analytics has a second post (from 2016 this time) with a global form factor breakdown: 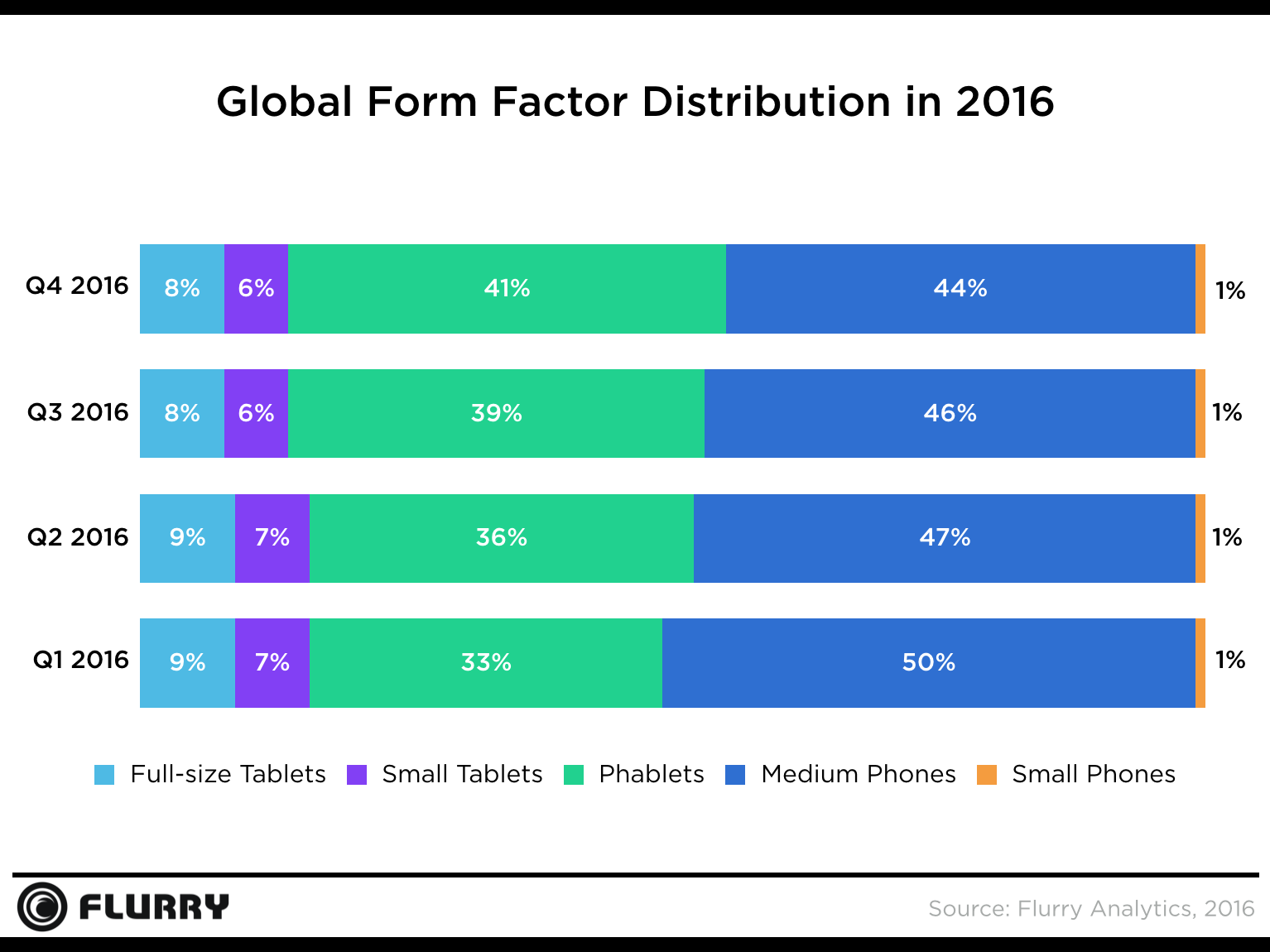 Back in 2007 I wrote a BlackBerry OS application to perform a simple e-mail routing health check procedure. It turned out to be a hellish process, and not just for the fact that I’m not much of a Java developer (I don’t include Java in my list of skills on my resume). That was a minor problem compared to the overly involved process that had to be undertaken in order to simply compile the damn app and deploy it to a handheld for testing. On top of all that, Research In Motion at that time required that any developer who wished to use certain parts of their API, even just to test on their own device, to register at the cost of $200 USD. My employer paid this fee on my behalf, but it capped off an unpleasant process.

Times have changed and RIM has learned a few lessons. Developers no longer have to pay RIM merely for the pleasure of developing an app, but they do still face an unclear process for deploying to a test device. For both my own sake and for other developers, I’ve attempted to do a comprehensive write up of the process of deploying a BlackBerry WebWorks app to a PlayBook tablet. It consists of ten rather involved steps, but after the first time you do it once the process shrinks down to just the two last steps.

All right – let’s both take a deep breath and get started.

END_OF_DOCUMENT_TOKEN_TO_BE_REPLACED

While it’s very likely that the BlackBerry PlayBook will receive a native Twitter client in the near future, without an official release date, owners of the PlayBook are left to look to third party developers to fill the gap. At the present time, only two options exist: Tweedless by Mikko Haapoja and Blaq by Kisai Labs.

Tweedless, available free of charge, is a (nearly) fully-featured Twitter client for the PlayBook, with the five icons in the top-right corner of the user interface dedicated to the Home screen (all tweets), Direct Messages, Mentions, Compose Tweet and Compose Direct Message.

What differentiates Tweedless from other Twitter applications – and is the primary manner in which the author describing it – is a Twitter app that “helps you separate the signal from the noise.” In practice, this has a third of Tweedless’s UI dedicated to a “User Filter”, where the selection of one or more of the accounts you are following allows you to view only those tweets. Tweedless keeps track of the number of times you select an account, and over time “automatically sorts who you interact with most” – permanently moving those users to the top of your list for easier selection in the future. The User Filter can be swapped (using the selector at the bottom right) to a Content Filter, allowing you to view only tweets with images, videos or links in them.

The five icons in the top-right corner of the user interface dedicated to the Home screen (all tweets), Direct Messages, Mentions, Compose Tweet and Compose Direct Message. Finally, actions you can take upon a tweet (mention, retweet, direct message or view profile) can be taken dragging your finger to the right upon a user’s profile icon to reveal a set of buttons for those purposes.

Despite the innovative interface, I find using Tweedless an uphill challenge due to three factors:

First, the absence of lists in Tweedless is a huge detractor to my Twitter experience, and is the reason I can’t in good conscience refer to Tweedless as a full-featured Twitter client. I use lists to group the accounts I follow by topic (News, Finance, Software Development) in order to bring context to the tweets I am looking at – User Filters and Content Filters can help compensate, but only partially or awkwardly.

Second, the profile icons pulled in by Tweedless appear to be sized on the small size and scaled up as needed, making the entire application look less crisp than we know is possible.

Thirdly and most detrimentally to the use of the application is that the scrolling motion in the application is somewhat broken. Dragging your finger across a list of tweets moves the list too slowly, a quick swipe upwards or downwards to view the next page of tweets instead sends you down two or three pages worth instead. There is no industry standard for expectations of what a slow or fast swipe will do on a touchscreen device, but the current behaviour is unusable. This, even more than the lack of lists, led me to investigate what the other options were for Twitter clients on the PlayBook.

Blaq ($1.99 USD) comes to the table with a terrific and truly complete list of features: Lists, username auto-completion, profile viewing, in-app website and photo previews and even embed.ly support. The user interface is fairly traditional, with a 50/50 split between the timeline and a compose tweet input box. Icons to view the Home Screen, Mentions, Direct Messages, Lists, Compose Direct Message and Refresh Tweets are located in the bottom right corner and are easily accessed with your right thumb.

While Blaq gets many of the essentials right, one minor and one major fault mar the value of this application. The minor issue is the way that the edge of the tab that slides out as you look at a Web/photo preview or a profile overlaps the main timeline, making a couple of characters in each unreadable. The major issue is that the current version being sold on App World, 1.0.6, is completely missing the Direct Messages, Lists and Compose Direct Message functionality – clicking any of those icons is unresponsive. At the current time, Kisai Labs has not communicated an ETA on a fix via their blog or Twitter account.

Despite having at least half of its expected functionality completely broken, at just $1.99 USD Blaq is for the moment the Twitter application of choice for the BlackBerry PlayBook, especially if you have faith that Kisai Labs will expedite a fix to correct these issues. Having to deal with situations like these is a bit of an indictment of the current state of development on the PlayBook, but it is my hope that the positives of the platform prevail and better options present themselves to its loyal users. 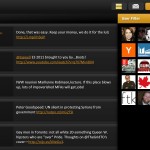 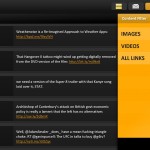 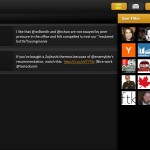 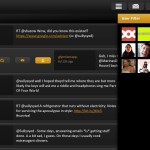 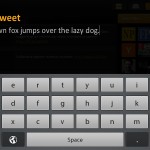 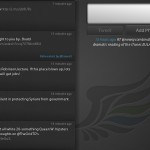 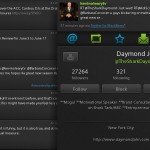 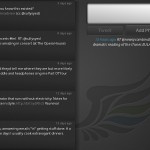 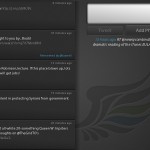 After purchasing a brand new Samsung Galaxy S Captivate from a Rogers Plus! store today, the customer service rep and I were both puzzled at the existence of a pattern lock screen on first boot. After trying random patterns five times an option appeared to reset the pattern using my account credentials, but entering my Google account information also failed to gain me access.

Taking the phone back to the office with me, I got on the line with Rogers technical support who provided me with the steps used to initiate a hard reset of the phone:

References: Hard reset not working (among other things) on samsung captivate – please help!