By way of Market Urbanism is a feature article in The Atlantic by Edward Glaeser about the history of tall cities like New York, Chicago, Paris and Mumbai. Glaeser is an economist by trade and thus talks at length about the incentives and disincentives of building height restrictions and the challenges of preserving historical architecture while simultaneously serving the need for new housing spaces.

The Atlantic – How Skyscrapers Can Save the City

In the late Middle Ages, the wool-making center of Bruges became one of the first places where a secular structure, a 354-foot belfry built to celebrate cloth-making, towered over nearby churches. But elsewhere another four or five centuries passed before secular structures surpassed religious ones. With its 281-foot spire, Trinity Church was the tallest building in New York City until 1890. Perhaps that year, when Trinity’s spire was eclipsed by a skyscraper built to house Joseph Pulitzer’s New York World, should be seen as the true start of the irreligious 20th century. At almost the same time, Paris celebrated its growing wealth by erecting the 1,000-foot Eiffel Tower, which was 700 feet taller than the Cathedral of Notre-Dame.

END_OF_DOCUMENT_TOKEN_TO_BE_REPLACED

The National Post’s Lawrence Solomon brought up a topic I read about recently on Market Urbanism – the fact that mass transit doesn’t have to equate to public transit, even if it’s only the operating part of the puzzle in private hands.

In specific, replacing the road-clogging streetcars of Queen St. with a subway line sounds like the best idea for the TTC I’ve heard in a decade. The density is there, as is a solution to the streetcar problem. Let’s get it built!

As urban guru Jane Jacobs advocated, public transit is a business that should be in private hands. But Mr. Ford would be wrong to give the TTC away. He should instead sell it to the highest bidder — the TTC would fetch $2-billion or more if put on the market, depending on the conditions attached (a decade ago, a U.K. company did try to purchase the TTC, but was rebuffed by the province).

Or, if Mr. Ford didn’t want to sell off the TTC holus bolus, he could auction off different routes, as did London, where contracting out was an instant success — the quality of service soared and costs dropped as companies offering everything from minibuses and double-deckers to subways and later trams competed for customers.

This is where a suggestion from Mr. Smith comes in. Instead of building the money-sucking subway that Mayor Ford suggests, Mr. Smith argues that Toronto should instead build a subway under Queen Street, one of Toronto’s busiest downtown streets. His argument — that Toronto would get more bang for the buck by putting a subway along a route rich with people and businesses — is indisputable.

I agree that a Queen Street subway, which would replace the now-crowded Queen streetcar, makes great sense. I further believe it could be built on a free-market basis, and some history bears me out.

A century ago, before governments across the continent took over transit systems, private companies ran streetcars for profit, and even paid cities a franchise fee for the right to use city streets. When traffic later became too heavy for the streetcars to handle, a subway would be built under the streetcar route, and the streetcars would be retired.

This was the formula for success that existed before transit systems became politicized and nationalized, and sometimes afterward, too: Toronto’s transit system, though it became city-owned by 1921, retained its business-like culture for decades.

Early operators of the Toronto transit system, in fact, had plans to build a subway under Queen, and in a 1946 referendum, Torontonians overwhelmingly voted to build a Queen Street streetcar-subway line that would have risen above ground at Logan to the east and Trinity Park to the west. (Unbeknownst to most Torontonians, one subway station of this east-west line would soon be built beneath the existing north-south Queen subway station.) A few years later, the proposed east-west streetcar-subway route was upgraded to a full-fledged subway route.

Then politicians got into the act, following the creation of Metropolitan Toronto in 1954. The TTC, which until then had profitably operated the City of Toronto’s dense urban routes, suddenly was required to also service Metro Toronto’s low-density suburban areas. Metro Toronto marked the beginning of the end of the TTC as a financially self-supporting business.

The viable Queen line was shelved — temporarily at first — in favour of an east-west Bloor-Danforth line that would reach the suburbs. Then temporary became permanent as the suburban politicians now dictating TTC policy gave priority to developing suburban routes, unconcerned that the Queen subway was viable while suburban projects were not. In the end, the TTC — easily the best and most profitable transit system on the continent — became a money-loser, like transit systems everywhere that are run by politicians.

Mr. Ford can end that sad history of wasteful public transit projects by marketing the Queen Street line to the private sector. Private operators would not only value the revenues that passengers would leave behind at the farebox but also the revenues to flow from the Queen stations’ retail potential, given that Queen is one of Toronto’s premier shopping streets and that station operators are increasingly capitalizing on the shopping potential of street-level stations.

About The KNIGHT XV

Conquest Vehicle Inc’s flagship vehicle, the KNIGHT XV defines the future of the ultra-luxurious, handcrafted fully armoured SUV. This one-of-a-kind, V10, 6.8-litre, Bio-fuel powered SUV was inspired by military vehicle designs and features security appointments that are unrivaled in today’s SUV marketplace. The production of the KNIGHT XV will be limited to 100 vehicles.

Are you ready to be Knighted?

I’ve never heard of Conquest Vehicles Inc. before seeing the vehicle mentioned above on Series 15 of Top Gear. Oddly enough, the company is headquartered right here in Toronto, Canada.

Just putting this on here for the sake of remembering how downtown “looked” during this once in a lifetime summit here in Toronto. All hysteria aside, not much is really going on in the city. A couple of police cars were torched at Bay & King. Have yet to see a police officer utter a single word to a protestor. 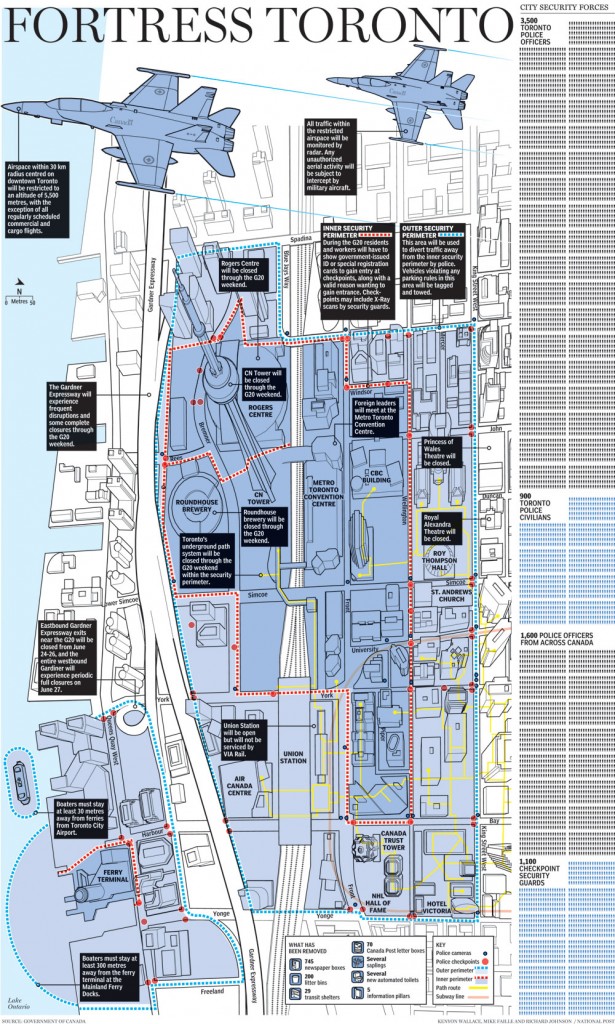